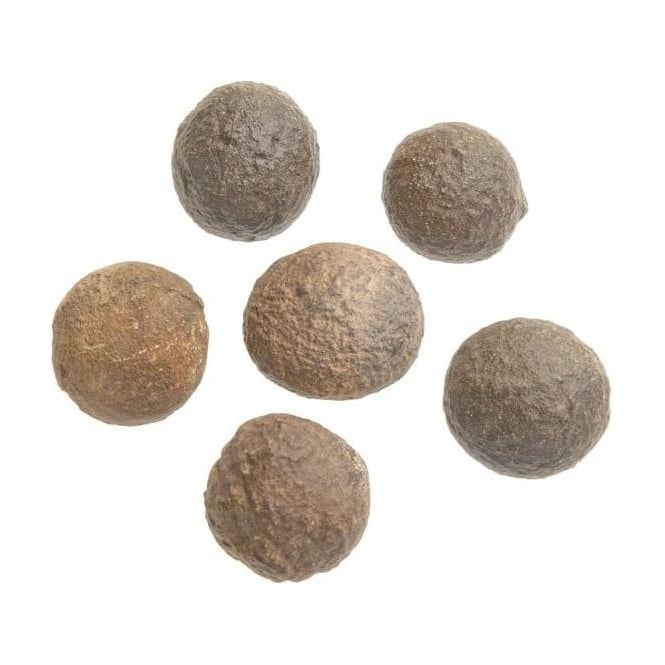 Shaman Stones, Moqui Marbles or Mochi Balls, thunder-balls are just a few names for these sacred stones. They were named after the Indians who lived on the land where they were found. The Hopi language 'moqui' means 'dearly departed one'. Legend-tells us that the Hopi's departed ancestors would play games with the marbles in the evening, when spirits are allowed to visit the Earth. They had to return at sunrise, so they would leave the marbles behind to show their living relatives that they were happy and well. Moqui marbles are said to protect your home from harm and create a nurturing space. Greta to meditate with them feeling freedom and protections when traveling.

There are many legends surrounding these strange stones;shamans use them to heal and communicate with other realms and Hopi Indians play marbles with their ancestors to gain knowledge. Moqui Marbles or Mochi Stones are mysterious sandstone balls covered in hematite (iron ore) and were discovered in the Navajo Sandstone Formation in Utah. These stones are found in pairs: one more rounded formation which is considered the female and has a - charge and the disk-like formation which has a + charge. They have an uncanny ability to realign the energy body and energy centers immediately, without a lot of mumbo jumbo. When we work with computers all day, or have night shifts or generally get into a negative spiral, our energy polarity (male/female or +/- charge) can get off balance. These stones reboot the +/- energy flow and stabilize the energy field.

They have strong metaphysical properties for spiritual growth, and will help you to overcome fear, especially important when journeying.

They are psychic protection stones, and will prevent negative entities from attaching themselves to you.

As they are very helpful stones to aid you when you are doing shamanic journeys, their name comes from this aspect of their energy.

Where Does It Come From

These specific stones are also called Moqui Marbles or Moqui balls, and are found at the north rim of the Grand Canyon in Utah in the USA. They were named after the Indian tribe that lived in the Moqui Desert.

The children of the Indian tribe who lived there were known to play with these stones, particularly the smaller stones, and used them like children today use marbles, hence the name Moqui Marbles.