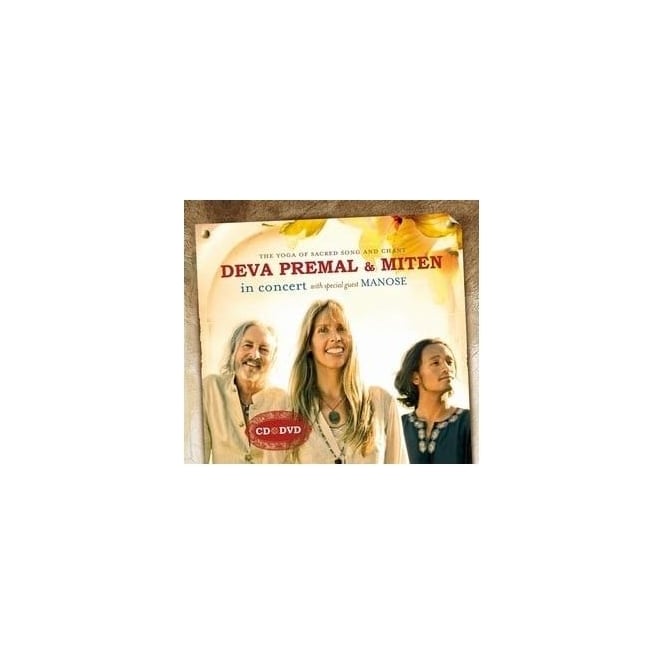 Track Listing
Disc 1
1    Moola Mantra (Invocation)    03:23
2    Calma E Tranquilidade    08:27
3    Aad Guray    07:59
4    Gayatri Mantra    08:20
5    Shamno Mitra    02:05
6    Mother Inside    04:10
7    Ilumina    03:44
8    Radhe Govinda    08:51
9    Twameva    05:53
10    Awakening    07:08
11    Maha Mrityunjaya Mantra Bonus Studio Track    01:42
12    In The Light Of Love/Om Shree Dhanvantre Namaha    07:18
Disc 2
1    Gayatri Mantra
2    Twameva
3    Calma E Tranquilidade
4    Maha Mrityunjaya Mantra
5    Awakening
6    So Sings Rasika
7    Shamno Mitra
8    Mother Inside
9    You Gotta Move
10    Tumare Darshan
11    Free Spirit (Ashes To Ashes)
12    Radhe Govinda
13    So Much Magnificence
14    Moola Mantra Invocation (Reprise)
Artist Biographies
Deva Premal
German-born Deva Premal is a classically trained musician and gifted singer who grew up in an atmosphere of mantras and eastern spirituality. She has been called both 'the queen of mantra' and the 'high chanteuse of chant'. Miten, originally from Britain, began as a singer-songwriter-guitarist in the 70s opening for such groups as Fleetwood Mac and Ry Cooder. He then discovered the power of meditation and left the world of rock 'n' roll behind. The two met at an ashram in India in 1990.
With her face gracing magazine covers, such as Natural Beauty & Health and New Age Voice, and one of her signature pieces, The Gayatri Mantra, being performed by Cher on tour, Deva Premal's star, along with Miten's, is on the rise. Their music, once found only in yoga studios, meditation centres and spiritual festivals, is now featured in record stores around the world and listed on Amazon.com's New Age Top 10.
Deva Premal & Miten have released 14 albums, including the new-age category bestsellers A Deeper Light, Into Silence, The Essence, Password, Love is Space, Embrace, and Dakshina. For more information, visit devapremalmiten.com.
Miten
Known now as Miten, Andy Desmond had become a stalwart on the British rock scene, opening for Fleetwood Mac, Randy Newman, Hall and Oates, The Cate Brothers, The Kinks and many others. He was invited by Fleetwood Mac to be their special guest on their UK Rumours Tour, and opened for Ry Cooder on his 1978 European tour.
Disillusioned with the rock world and the life style, he went on to explore meditation and Eastern philosophy. He was initiated into 'sannyas' in 1980 by controversial Indian mystic, Bhagwan Shree Rajneesh and given the Sanskrit name Prabhu Miten meaning friend of God. He has lived among the Osho community ever since, spending many years in India at the Osho ashram.
Miten now tours the world with his musical and life partner, Deva Premal, whom he met at the Osho Ashram in 1990.
Manose
Manose, Nepal's premier flutist, fell in love as a child with the bamboo flute. His astonishing ability to improvise is grounded in a technical mastery gained from devoted study to classical raga music, allowing him to explore the instrument's practically limitless potential for subtle expression. Since 2005 Manose has been touring worldwide with Deva Premal and Miten and has performed and recorded with, amongst others, Jai Uttal and Krishna Das.

In response to the many requests received over the years, this long awaited album of Deva & Miten 'In Concert' releases in June 2009. Deva, Miten, and Manose have been touring together constantly for the past 4 years, during which time their concerts have gained a reputation for spiritual rejuvenation, high celebration and deep meditation, steeped in the richness of Sanskrit mantra.
In 2008 alone, they delighted audiences in no less than 22 countries. This CD/DVD package captures the spirit of the trio's live experience exquisitely, in their ‘home town of Byron Bay Australia.
This set contains many of their most inspirational mantras and songs, plus 6 previously unrecorded, brand new pieces.
The 2 hour Bonus DVD captures the magic of the evening, along with personal interviews and extras, while the CD lasting 69 minutes features the haunting, uplifting new anthem 'In The Light Of Love/Om Shree Dhanvantre Namaha'.