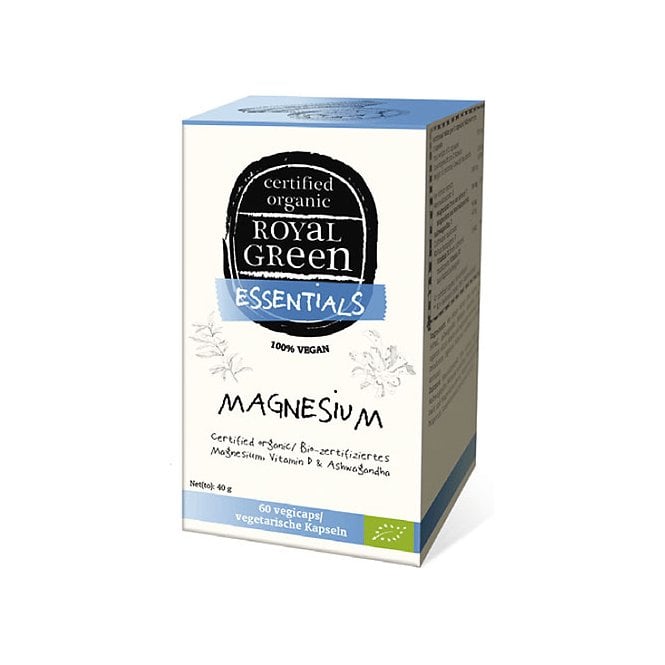 Royal Green Magnesium delivers magnesium, vitamin D and ashwagandha in certified organic form. Their certified organic magnesium comes from a special sea lettuce. Royal Green uses absolutely no chemicals, preservatives, synthetic sweeteners or flavour enhancers. Naturally gluten free. Our magnesium comes from nature, is recognised by the body and has an optimal effect in the body.

Magnesium and Vitamin D contribute to the normal function of the muscles and nervous system.

Royal Green Magnesium is the first product in the world to offer Magnesium, Vitamin D and Ashwagandha in certified organic form.

Suggested use and characteristics:

NB: Store in a cool dry place and keep out of reach of young children. Food supplements should not be a replacement for a varied and balanced diet, and a healthy lifestyle.

Do not exceed the recommended daily dosage. Keep out of reach of children. As with every dietary supplement, consult an expert before use in case of pregnancy, lactation, illness or medicinal use.

Contraindications: Consult an expert before use in case of pregnancy, lactation, illness or medicine usage Consult your doctor or pharmacist in case of concomitant use of antidiabetic treatment

Ashwagandha contributes to the normal resistance to temporary stress.

Our magnesium comes from nature and grows without the use of pesticides.

Vegetable magnesium dissolves easily, does not cause stomach upsets and has a maximum absorption and effect.

Magnesium: is involved in more than 300 enzymatic processes.

itamin D2: plays an important role for bones. It improves calcium absorption in the intestine and activates the cells that create bone. Ashwagandha: one of the most powerful Ayurvedic herbs.

Scientific research shows the effect of using it against mental problems like stress, depression and fatigue.

Ideal to combine with: Multi Woman/Man, Vitamine B complex, Maca & Astaxanthin. RDA 250 mg 67% 5 mcg 100% 50 mg Magnesium deficiency? The World Health Organization (WHO) indicates that about 20% of the population in Western Europe has a magnesium deficiency.

Causes magnesium deficiency The reason that magnesium deficiency is so common, is because our food unfortunately contains very little magnesium due to soil depletion and artificial fertilization. Moreover, our diet consists of many processed products that usually do not contain the mineral magnesium. The consumption of soft drinks, sugary food and medicine deplete the magnesium in our body.

Benefits in taking magnesium Stress also plays a major role in the development of magnesium deficiency. The more stress, the more magnesium is consumed. The lower the magnesium level in the cells, the more sensitive you are to stress. Cramps: A low level, or a deficiency of magnesium in the muscles can lead to cramps. If you lose a lot of fluid and salt through excessive sweating, you can get cramps. Stress may play a major role with cramps during the night. This is why we add vitamin D2 and Ashwagandha to Royal Green Magnesium. These ingredients both have a positive influence against stress. Tinnitus: One of the functions of magnesium in the body is to ensure that the body does not release too much calcium. Calcium is, among other things, responsible for small blood vessels to narrow. Poor blood flow to the hair cells could cause tinnitus because the cells do not receive sufficient oxygen and nutrients. A magnesium deficiency can therefore have an effect on tinnitus and may be the cause of hypersensitivity to noise. People in large cities are exposed daily to a large number of loud noises. Research shows that exposure to noise causes a magnesium deficiency in the body [1]. Magnesium protects the nerves in the inner ear and is a glutamate antagonist. Glutamate plays a role in the onset of tinnitus. Glutamate is a neurotransmitter and acts excitatory to the nerve cells in the brains. Research has shown that magnesium has a significant protective effect on the inner ear in the onset of tinnitus and hearing loss as a result of the exposure to noise [3]. Depression: Several studies have shown that there is a clear link between magnesium deficiency and depression. For example, one knows that people who suffer from depression usually have much lower magnesium levels in their bodies than people who are not depressed (Levine et al., 1999 [4]). It has also been shown that if extra magnesium is administered via the blood, the amount of depression symptoms is significantly reduced. Anxiety: Magnesium is known to counteract palpitations and relaxes muscles and blood vessels, resulting in an anti‐ anxiety effect. Researchers have also shown that there is a strong connection between anxiety and a magnesium deficiency. Large research has shown that the more magnesium you ingest through food, the less you will suffer from anxiety symptoms (Hanus et al., 2003 [5]). Heart disease Doctors are prescribing magnesium since 1930 for heart disease. Patients receiving magnesium after a heart attack have a better chance of survival. In the second Leicester Intravenous Magnesium Intervention Trial (LIMIT‐ 2), a protocol was developed to administer magnesium as soon as possible after the occurrence of a heart attack, before administering other medications. This resulted in that damage to the heart muscle was strongly reduced and that the death rate dropped by 21% [7]. The activity of magnesium in heart attacks is based on the following actions of this mineral: magnesium dilates blood vessels, prevents spasm in the blood vessels and heart muscle, helps to reduce blood clots, prevents cardiac arrhythmias and reduces the damage to the heart muscle and the formation of free radicals. Insomnia Magnesium is an important mineral for proper and uninterrupted sleep. Research shows that a magnesium deficiency causes changes in the electrical activity of the brains. This results in a sleep that is restless and interrupted. Melvyn R. Werbach writes in an article in the Townsend Letter for Doctors and Patients’ [8] that insomnia is one of the symptoms of magnesium deficiency, that has an effect on the central nervous system. [8] Other sleep disorders, such as night terrors, talking and uncontrolled movements in sleep, restless legs, may be related to a magnesium deficiency [9, 10].