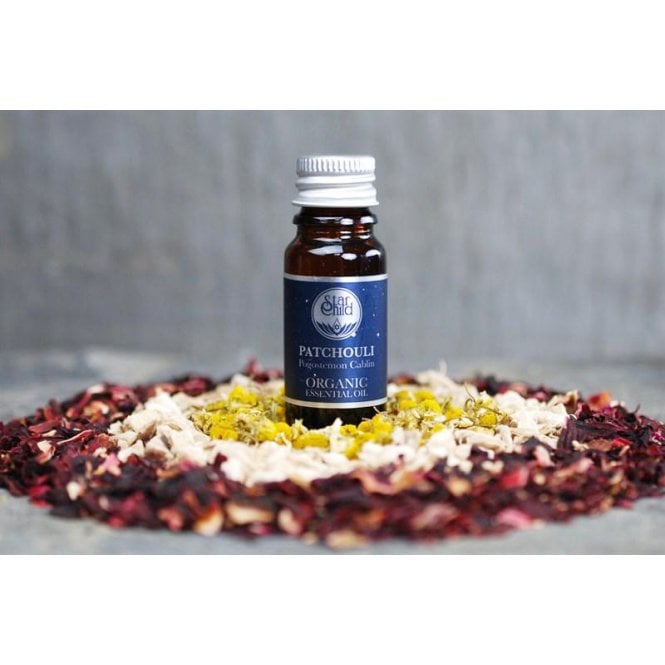 Patchouli has some very useful medicinal and therapeutic properties and has been used in Ayurvedic medicine where it is said to address the imbalances of Kapha.

Traditional:Patchouli oil is used in aromatherapy skin care for all kinds of problems, such as chapped skin and cracked feet, athlete's foot, dermatitis, weeping eczema, and as an hair care oil for greasy hair and dandruff. It is used as a deodorant and insect repellent. It is effective against insect bites and stings. It may be relaxing and aphrodisiacal, though opinions on this matter differ.

Magical:The scent of Patchouli stimulates the base chakra. It can be used in love charms and amulets to attract a lover, though presumably only ones that like the smell. It can be used in sex magic providing both partners respond positively to it. It has an affinity with the element of earth and can be used in rituals of Saturn.

There are few essential oils that provoke more extreme reactions -people either love Patchouli, or they hate it, there is no middle ground.

Most of the time, Patchouli conjures up images of hippydom and 60s flair. At the time it was THE natural perfume and everything and everybody seemed to be wafting in clouds of it. Perhaps it was the exotic note that tele-transported them straight to India, the hippy paradise and homeland of Patchouli oil, or maybe it was the dark, musky, slightly raucous scent that seemed to capture the fragrant essence of the era's sexual revolution. Or perhaps it was just particularly effective in covering up the scent of pot. Who knows, not even time will tell.