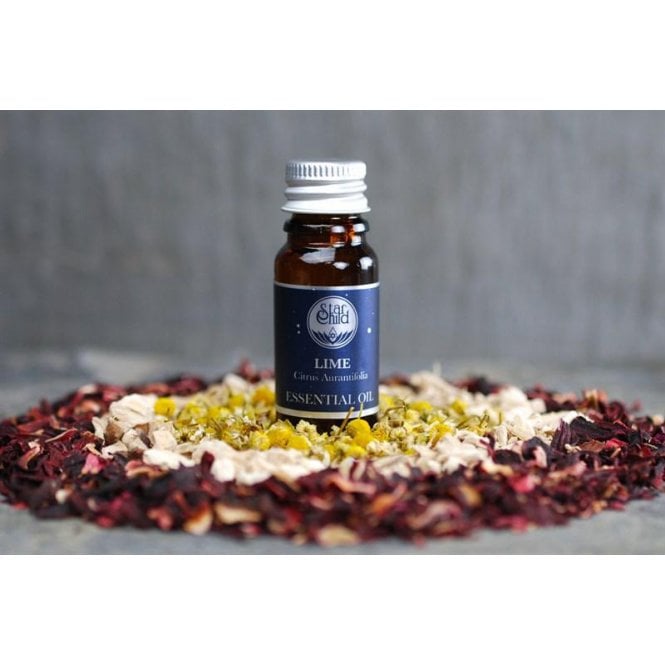 Aromatherapy uses for Lime are similar to those for Lemon, though Lime is more refreshing and acts more noticeably on the mind. In Southeast Asia, even the leaves of Limes are used as a spice. There, they also play an important role in folk medicine and magic.

Traditional:Lime fights fatigue and stimulates alertness due to its energising effect on the circulation. It can be used to treat headaches (especially where these arise from exhaustion) and makes a very refreshing compress for feverish conditions. In aromatherapy skin care it can be used to treat brittle nails and in cleansing preparations for spotty and greasy skin. It also acts on corns, warts and boils. It is very effective as a skin toning agent for treating cellulites and broken capillaries. It can be used to clear the air in a sick room and helps clear mucus congestion from the upper respiratory tract. Like other Lemon scented oils Lime repels insects and soothes the itchiness of bites.

Magical: According to Malay folklore evil spirits hate it, which makes it useful for all kinds of ritual cleansing and purification, and above all, for protection. It can be used to protect a newly wed couple, or to avert vampires, or to guard the souls of newborn babies. It is also mentioned as being used for love spells, though it does not feature as an aphrodisiac as such. Lime gives zest and alertness, though it is too energising for meditation. Rather, it strengthens spiritual warriors in the eternal fight against evil.

Lime is the leprechaun of the Lemon family, a cheeky little green fellow with a mischievous twinkle in his eyes - if limes had eyes, that is. However, limes, being of distinctly tropical origin, prefer warmer climes than the leprechaun.  Though they became world famous as Key limes or Mexican limes their true home is the Malay archipelago from where they have migrated, taking advantage of passing Arab traders, who brought them back to the Mediterranean. However, the Mediterranean climate does not suit the lime that well and so, it never became widely cultivated there. Instead, it set its eyes on the New World, which it reached with the ships of the Spaniards and there, in the tropical islands of the Caribbean, it felt right at home.

In Western countries they are now mostly appreciated for the distinct flavour they give to Key Lime pies and to various cocktails, such as 'Margaritas', which has earned them the nickname of 'Cocktail Lime'. Crafty chefs actually use it as a 'secret ingredient' in numerous dishes, adding a certain barely discernible 'twang' that excites the palate.

Malaysian witch doctors use limes for all manner of spells: to win someone's love, to cast the demons of disease to the winds, to protect against all manner of evil devils, to protect new born babies and their mothers during pregnancy and boys at their circumcision rites. Caution: like other citrus oils Lime can irritate the skin in sensitive individual and causes treated skin to become photosensitive.