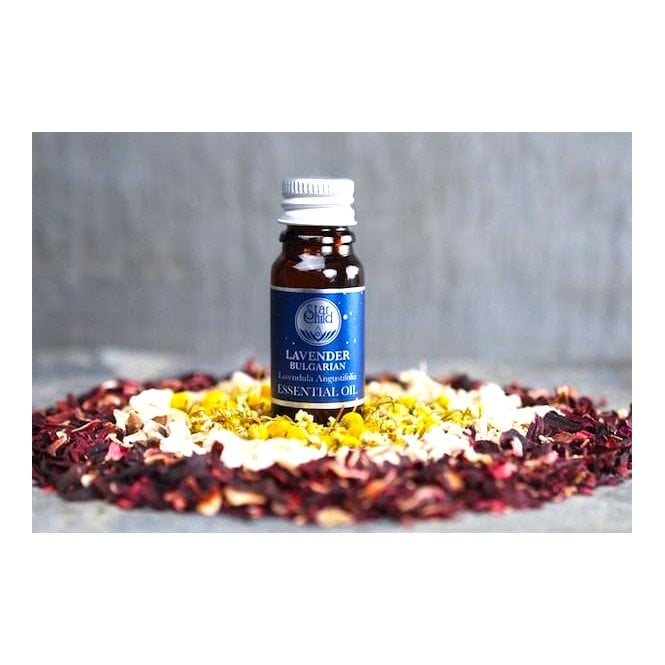 Lavender essential oil, without a doubt, is the most commonly used essential oil in aromatherapy and cosmetics. It's scent is so neat and clean and tidy and soothing and pleasant - in short, reminiscent of grandma's linen closet. Lavender is indeed used in numerous household products, such as soaps and washing powders. But Grandma probably placed a little sachet stuffed with Lavender flowers between her linens, which not only lent them that special scent of floral freshness, but also kept the moths and bugs away. The very name 'Lavender' is descriptive of these age-old uses, which go back to Roman times. The Latin word 'lavare' from which 'Lavender' derives, simply means 'to wash'. Although Lavender is a Mediterranean herb and at home in the dry, hot climate of the Provence, it has also long been cultivated as a commercial crop in Britain. In southern Europe, Lavender flowers early and provides welcome spring nectar for busy bees. The resulting honey is sold as a precious delicacy. However, in France the deeply violet flowered French Lavender (L stoechas) is by far the most common species encountered in the wild. It has been used medicinally in France as well as in England until about the middle of the 18th century and was an important ingredient of the famous 'vinegar of the four thieves', which at the time was hailed as one of the most effective preventative remedies against the plague. Lavender also had the power to ward off other invisible demons and devils, and was burnt for protection at the summer solstice.

Traditional
The favourite oil of aromatherapists, Lavender is incredibly versatile and useful. Because of its balanced nature, agrees with just about anybody. In aromatherapy skin care products it can be used for all skin types, but is particularly soothing for inflammatory skin conditions, acne, dermatitis, eczema, psoriasis nappy rash and boils. It is an excellent first aid remedy for burns and prevents scarring. It is also very effective for treating insect bites. Lavender is used to treat infections of the upper respiratory tract, though Lavender Spike is better suited for this purpose. It is a well known and singularly useful remedy for light-headedness or dizziness, and is even effective in fainting or as a first aid remedy for shock. Lavender can be used for depression, tension headaches, stress and anxiety.

Magical
Lavender is perhaps one of the best oils to use for purification, protection and for healing rituals. It calms and centres the mind and is a great aid for meditation. Its superior balancing qualities are ideal for chakra-balancing. It can be used to seal a platonic friendship, especially between teacher and student. Lavender is a plant of Mercury, and is well suited to calm an overactive mind and to stabilise emotions. It may be used for studying, as it may deepen understanding, but should be avoided in case of mental exhaustion (it will send you to sleep).